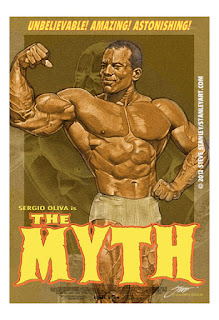 Here's one of my crude comprehensives for a poster idea, based on the bodybuilder, Sergio Oliva. He was nicknamed "The Myth", due to his unbelievable size & muscularity. Little known fact is Oliva beat (7x Mr. Olympian) Arnold Schwarzenegger for the Mr. Olympia title back in 1969.
Posted by Who is Steve Stanley? at 8:06 PM No comments: 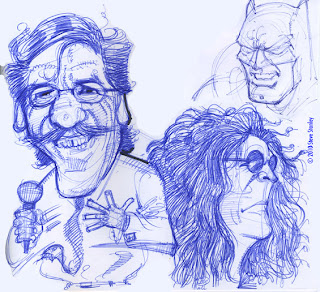 On a flight home from an out-of-state gig, I carried on with me my sketchbook to do a little mindless drawing. For some reason I left my drawing pencils and pens inside my luggage. Duh! Luckily I found a pen and also a National Enquirer stuffed inside the seat-netting in front of me. Apparently someone worked a crossword puzzle and blackened the teeth of a smiling celebrity. (OH wait, that was me.)  Inside the rag were two fancy faces that stuck out like a sore thumb. Oh joy oh bliss--Geraldo Rivera and Howard Stern.

Entertaining or complaining, both guys at some point ate the foot of a chair during their careers and left us amazed at why the cameras would continue rolling. Sensational Springer-vision! That's why! Our interests and limbic systems forever tainted.

My catharsis, and much needed, developed these hastily drawn caricatures of both media-hookers, with viper-like ties and Medusa-like hairdews. Geraldo sports a small nose bandage, and Stern sports his original nose and chin.

Posted by Who is Steve Stanley? at 7:34 PM No comments:

Caricatures are so-- "relative". 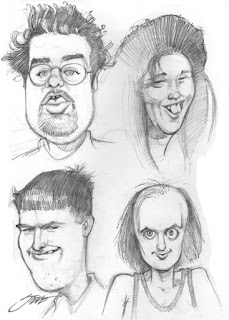 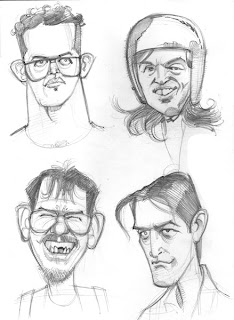 A few years back, I found these guys on some website and naturally I had to draw them. But I couldn't tell if they were real people or real people portraying my relatives--anyway, they fit nicely in my sketchbook. I actually resemble the guy in the 4th spot--JUST kidding. :P

Hide your dog!
Posted by Who is Steve Stanley? at 12:07 AM No comments: 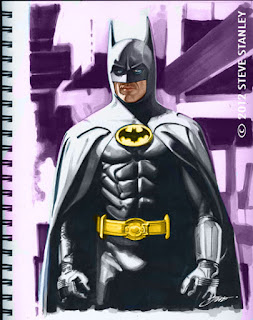 And a Michael Keaton Batman fan am I. Inspired to draw--something!--in my sketchbook I grabbed some Copics and scribbled out the Dark Knight. Once I got tired of looking at the lifeless gray-toned page, it was scanned and sprinkled with color in PS. Not glamourous, but neither am I.

The Chronicles of Yawnia continue.

Who is Steve Stanley?
I'm really just a guy who loves what he does for a living--which is to draw, paint, create, think, and problem solve. And in truth, I'm still just trying to figure out where I'm supposed to fit in artistically. Since I have long bouts of solitude I'm introspective to a fault. (Of course all of this will change tomorrow. :)